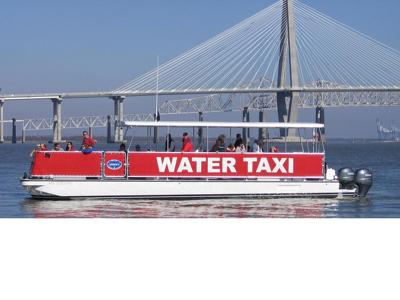 Want to see some dolphins? Want to witness some historic sites from the water or see some of Charleston's beautiful attractions? Take the Water Taxi! The Water Taxi runs from 10am - 7pm, seven days a week. Use it to get to downtown Charleston, the South Carolina Aquarium, the USS Yorktown (aircraft carrier), or just for a relaxing, scenic harbor boat ride. You can get off the boat and take as long as you wish to tour any of the local attractions. The Taxi runs every hour so you catch any of our hourly boats back to your destination.

Patriots Point Naval Museum - Home of the USS Yorktown, the most visited attraction in the state

South Carolina State Ports Authority - One of the largest container ports on the east coast. Watch the BMW and Mini's being loaded.

Castle Pinkney - On the island of Schutes Folly, it was used as a Fort, Prison, and artillery position during the Civil War. It was the first Union Fort taken by the Confederacy

Fort Sumter - Visible in the Distance. First shot of the Civil War

Join in and write your own page! It's easy to do. How? Simply click here to return to Submit Your Charleston Tour.